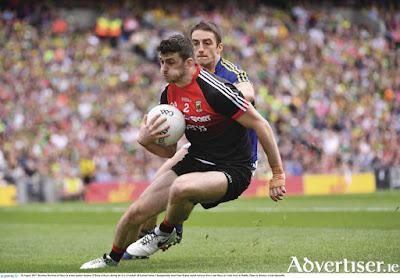 Photo: Mayo Advertiser
“We are living in the greatest era of Mayo footballers”
This is a phrase I have often heard ever since I first started following Mayo football and when you stop and take a minute it is very hard to disagree with the statement.
Throughout the years we have had exceptional players wear the Mayo jersey who have cemented their legacy in Mayo football history.
In today’s post I will be talking about a player who even though made his senior debut in 2014 since then has gone on to become one of Mayo football’s greatest servants defender Brendan Harrison. 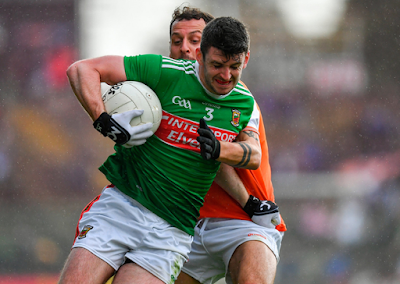 Making his debut against New York in 2014, the Aghamore man has gone on to make 50+  appearances in the green and red jersey, 3x Connaught Championships, 1x Allianz NFL Championship and 1x All Star winner.
When you look back on the Mayo teams throughout the years there will always be the iconic players like Peter Burke, Ciaran McDonald, Alan Dillon, but throughout the years the media has always said this era is the best era of Mayo footballers that has ever been produced.
Brendan Harrison has only been on the senior panel since 2014 and he is already being considered a Mayo legend and its safe to say the title has been well earned. 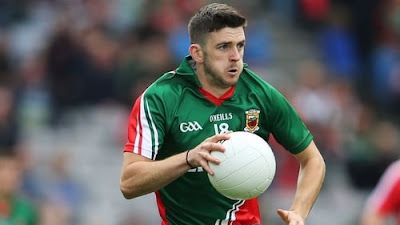 Throughout the Mayo panel I feel many players dont get the appreciation that they deserve and I feel Harrison is one of these players.
Being an Aghamore woman, the small club that it is, You cant be any happier knowing Brendan is flying the Aghamore flag in the Mayo panel and I have no doubt he wont be the last, He may already be an inspiration to the future of GAA players in the county but Harrison is a great ambassador for Aghamore, proving you can make your aspirations a reality no matter where you come from really. 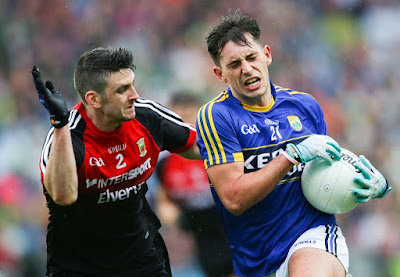 Although Harrison picked up an injury in 2015 it was just a bump in the road to a well deserved All Star win in 2016 proving to be the year we got to see Brendan at his full potential.
As a fan you always want the best for the players like back when Andy Moran retired or even the recent retirements you would do anything to give the lads an All Ireland medal because you know they put their heart and soul into every game and represent their county with honour.
I have said before when you look back on the teams of Mayo GAA history you will always have the jerseys numbers that just belong to one specific player such as Ger Cafferkey number 3, Andy Moran number 15 and Its safe to say the number 2 jersey will forever have the Harrison name. 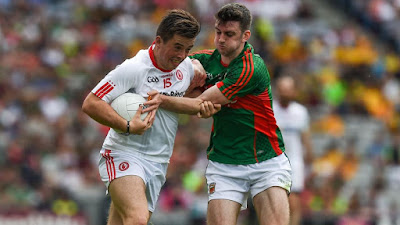 When you analyse Harrison as a player no matter the type of match or opponent you are proud to have that man out on the field wearing a Mayo jersey.
With the recent retirements one thing I am hoping is to see more of Harrison on the field, with the skill set and passion shown each game I have no doubt Harrison would have a massive contribution to getting us back to division 1 or even back into more finals if given game time.
During the 2016 All Ireland Final Replay against Dublin in 2016 David Clarke had to make a vital safe against Bernard Brogan and there is a picture by David Farrell Photography where you can just see how much the game means to Harrison and it makes you even prouder to have him wearing the Mayo jersey.
An often phrase at the start of each season is ” A new leaf is turned over”, its not long now till football resumes and I’m hoping Harrison will simply get the opportunity because the whole of Mayo knows what he is capable of as a player and he is simply cementing his legacy as a Mayo legend and what a legacy he has built in only 7+ years. 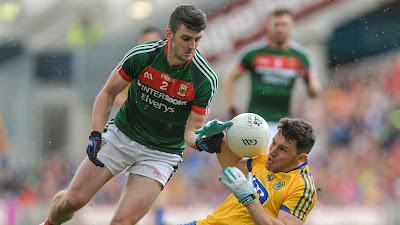 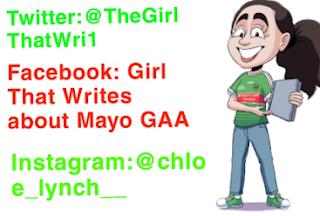 Wing Back- Kathryn Sullivan March 8, 2022
Previous Post What does it mean to be a Mayo GAA fan ? – Mayo Day 2021
Next Post The Legends Series – Ciaran Mc Donald